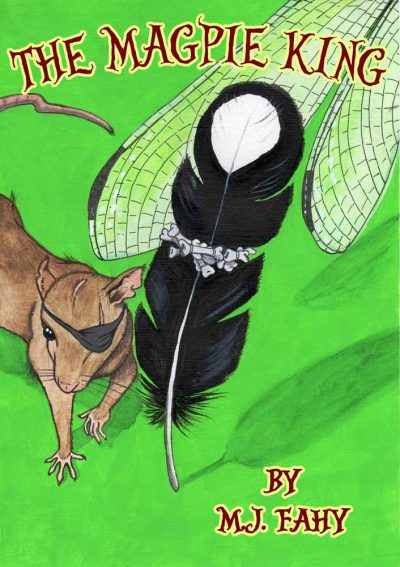 A beautiful middle grade magical adventure: In the large and frightening world of the Bigguns, Tatty Moon, a faerie child, must rid her village of thieving magpies and rampaging Gnomes, all under the spell of the Queen’s merciless nephew. With the help of a group of friends who include a gypsy, an elf, a wood sprite, an elderly rat, and a hawk-sized dragonfly, Tatty journeys far to try and defeat him.

What Inspired You to Write Your Book?
I'd always wanted to write a children's story; the characters were in my head for many years, clamouring to be let out, until one day I had to give in to them and so began writing The Magpie King.

How Did You Come up With Your Characters?
My main book characters are faerie children, so I tried to recollect what I was like as a kid. It was surprisingly easy to remember all the scrapes I got into, and how I wriggled out of them. Some of my characters are animals, and even insects! In this instance these creatures are made more sophisticated and clever by being around magic, so that enabled me to give them proper personalities.

Book Sample
‘The chrysalis began to squirm; lumps and bumps appeared over its surface as the thing inside tried to break out. A split appeared near the top, where a stalk-like protrusion glued it to the top of the cupboard. The split lengthened. Thick green slime oozed out and plopped onto the dirt floor. Next, a small hand appeared, followed by an arm and a shoulder. It emerged and dragged its body free of the chrysalis, dropping to the floor with a squelch. The bedraggled child sat cross-legged, exhausted, head drooping. Tiny wings, which had been as crumpled as withered petals, began to unfurl as new blood pumped into them.
Miss Pleasant grabbed the little creature and rubbed it with an old scratchy towel. She filled the cupboard doorway, blocking the view. The child began to bawl at its rough treatment, causing the womenfolk to ‘Aaaaaah’ in unison.’